Posted by evermoon at 6:22 AM No comments:

...which is to say that it's scary, creepy, promising. This is Heath Ledger as the Joker in 2008's The Dark Knight (pic taken from AICN): 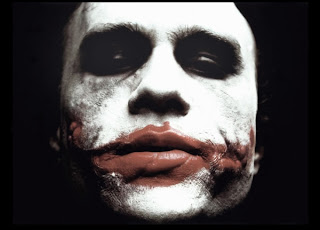 I had to see Spider-Man 3 a second time to realize that it was not such a bad movie after all, and a third time to see it as a drama that just happens to be about a comic book hero.

That is not to say that I learned to love the film during the subsequent viewings. When a movie fails to take a hold of its audience and convince them of its power the first time, there is something intrinsically wrong with how it was made. I wish I could say I loved the third installment as much as I did the first and the second (by far the best of the trilogy). But the second viewing did dispel my earlier opinion of the film being a careless mishmash of unnecessary and overly saccharine sequences. The second (and third) time around, the movie is more solid, and the dramatic encounters, while still on the cheesy side, make more sense.

The action sequences, particularly the fights between Peter Parker and Harry Osborn, could easily be the best in the trilogy in terms of flash and excitement, but with such exhilaration comes the dizzying shots and the obvious CG-look of the characters. The acting here is highly commendable, with the three leads (Tobey Maguire, Kirsten Dunst, James Franco) turning in especially affecting performances. Others may be turned off by the fact that every major character in this film sheds a tear or sobs outright, but a more careful assessment of it might reveal that all the comic book flair simply surrounds and at times intensifies what happens to be essentially a dramatic picture, with many of the requisite themes in the genre (i.e., deaths, doubts and realizations, hurting loved ones, learning to forgive oneself before others, etc.). Thinking of it this way, the movie is not as much a disappointment as one viewing suggests. Irrational at some points (e.g., overly simple and convenient way of getting the alien symbiote to Earth, the police doing nothing but watch Spider-Man struggle against Sandman and Venom, etc.), but never boring and always affecting.

The major flaws: the film might have been much leaner and more meaningful without the Sandman angle (there are many other possible ways to introduce Peter Parker's turning to the dark side); and Gwen Stacy (Bryce Dallas Howard) is a thoroughly useless character here. What a letdown for comic book fans! The inclusion of James Cromwell in the cast as her father had led many to think that Stacy would have a role the significance of which would be comparable to that of the original character, but she was simply a plot device, and not a very effective one at that. Many might include in this list of major annoyances Parker's horrid dancing under the influence of the symbiote, but I for one found it extremely amusing. Sam Raimi's touches of humor (thank God for Bruce Campbell) are very much appreciated in a film that is ultimately the darkest and most dramatic of the three. Grade: B
Posted by evermoon at 7:53 PM No comments: