Through the decades of cinema, Asian action films have had various interesting faces for an ever expanding world audience: the samurai flicks of Japan (from Akira Kurosawa's Shichinin no Samurai to Takeshi 'Beat' Kitano's Zatoichi), Hong Kong's classy police thrillers/dramas (a prime example of which is Infernal Affairs), Bruce Lee's deadly martial arts showcases and Jacky Chan's kooky acrobatic escapades, Korean vengeance films (mainly courtesy of auteur Park Chan-wook), and of course, the wuxia genre of flying fighters and dancing blades. Since the release of the monumental wuxia film Hsia nu (A Touch of Zen) in 1969, with a powerful female warrior played by Feng Hsu, Asian action women have enjoyed most exposure in this genre, lending their natural fluidity and grace to dancing atop trees, over water, over seasonal changes in the elements. Asian women, with their misleading fragility and innocence, have made excellent heroines in this and other subgenres of the action/adventure mold and have given us some of the more memorable cinematic moments in recent years.

As my contribution to Film Experience's Action Heroine Blog-A-Thon, I present my list of top 5 most memorable action heroines since 2000 (any earlier and no short list would give these women justice). NOTE: This is not meant to be a shortlist of the best female performances.

Not many outside the fandom of Hong Kong cinema, Sammi Cheng, or both have probably heard of this film, even by its international release title Wu Yen. But many fans of HK pop superstar Sammi Cheng, reigning queen of HK showbiz, would probably be hard pressed to find a more irresistably amusing, endearing, and ass-kicking role for their idol. Cheng plays the title character, a warrior woman in the rich wuxia tradition, who has been cursed with a nasty facial birthmark, an annoying spirit obsessed with her (played by another superstar, Cecilia Cheung), and a hate-love relationship with the Emperor (acted out brilliantly by the late great Anita Mui). The film itself is mostly funny but tends to be dramatic near the end, and Cheng handles the prism of emotions--and fight scenes--remarkably well. For this role, she won a nomination from the Hong Kong Film Awards and a victory from the Hong Kong Film Critics Society Awards for Best Actress. 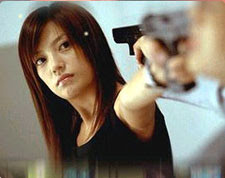 Fans may be divided on who the real star was in 2002's babe action flick So Close: traditionally hot star Shu Qi, all-around star Karen Mok, or cutesy Zhao Wei. My vote goes to Zhao Wei, not only because she has the longest screentime out of all three, but she also has the greatest development in terms of character. It's a big leap from being only second to big sis Shu Qi to being the trigger-happy, blade-wielding warrior woman that she becomes in the last half of the film. And while she becomes the modern action heroine that any man would be terrified of angering, she never loses the innocent cuteness for which just as many men would want her as their lover/bodyguard. 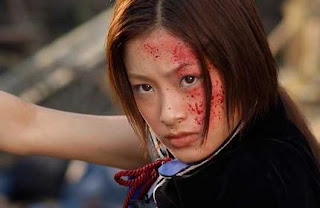 Anime fans rejoice! Japan has released a lot of anime-inspired live-action flicks in the past, but not very many come close to the approximation of the gleeful gore, maniacal pretty boys, and vengeance driven cute girls the way Azumi does. From the very beginning, the film is filled with gratuitously visual bloodletting, and in the midst of it all is martial artist and swordswoman extraordinaire Azumi. She's an exceptionally young warrior who loses many of her friends and consequently her innocence about life early on, and Aya Ueto is a natural is showing how her character matures throughout the film. The scene where she kills off a townful of enemies near the end is priceless, but her dramatic moments are just as precious. For playing a tragic character so well in her first acting job, she was nominated by the Japanese Academy for Best Actress. They gave her the Newcomer of the Year and Most Popular Performer awards. 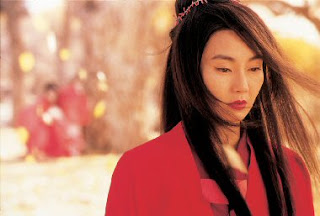 What deadly grace and beauty! The dance-like nature of wuxia battles has never been as elegantly and aesthetically captured onscreen as it was whenever Flying Snow was in a scene in the fantastic Hero. Who better to play such a tragically powerful character than the magnificent Maggie Cheung? She lends her considerable acting talent to a character with as many layers as the film has colors. Who could forget the forest duel between her and Moon (Ziyi Zhang), or the countless versions of her battle with Nameless (Jet Li)? In all that splash of color, it is Maggie Cheung's beauty and skill that shine through in every frame. 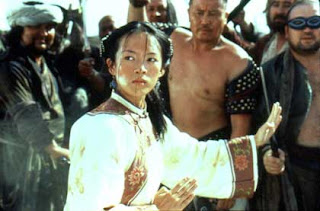 While Michelle Yeoh may be the heroine of this film, there is no doubt that it was young Ziyi Zhang's spunky charisma and awe-inspiring pixie beauty that had world audiences so transfixed on a newly revived genre (wuxia). She gets to fight with almost every breathing character in Ang Lee's Crouching Tiger, Hidden Dragon, including an inn full of that region's greatest fighters (or so they think). There are moments when sympathy for her character becomes doubtful, but there are as many moments when she shows great vulnerability, and regardless of how you feel about her at first, the development of her character near the end is so intense that by the time the last sequence rolls, she has hooked you in. Ziyi Zhang has proven in later films that she is a true actor (for her best perf, watch 2046). But it was her high-flying, tragic Jen Yu that put her, wuxia, and the warrior women of Asia back on the map. The role won her too many citations to mention, but they include noms for Best Actress from the Golden Horse and Hong Kong Film Awards.

Honorable Mentions: Qiu Yuen for playing the non-nonsense, butt-kicking landlady in Kung Fu Hustle (2004), and Shin Eun-kyung for playing deadly gangster Cha Eun-jin in the Korean flick Jopog manura (My Wife is a Gangster, 2001).
Posted by evermoon at 7:56 AM

Great list...Particularly due to your choice of Azumi. Aya Ueto does an extremely convincing job of being an unstoppable warrior. Not necessarily by her actions, but by her confidence and character.

Looking forward to seeing Azumi 2 one day, but it'll be hard to replace creepy androgynous guy as the main villain.

I really love Ziyi in CTHD. It's one of those performances that you don't even know what's going on with her, even barely to the end. Is she truly good? Is she truly the villain? Or is she just a scared, naive young girl not knowing of what's she's getting into? Probably the last one, right? Right? Very, very good post nonetheless. [thumbs up]

bob turnbull: Thanks. Azumi 2 doesn't quite measure up to its predecessor (for one, it doesn't have anyone to replace the creepy androgynous guy), but it's still fun. If only because you get to see Aya Ueto as Azumi again.

jd judge: Thanks! Yup, probably the last one. She wasn't really raised in a good environment, so she grew up not knowing a lot of things that people take for granted.

i haven't seen 3 through 5 but will keep an eye out. I'm glad to hear praise for Flying Snow. That character really got to me... partially because Maggie Cheung is so exceptional an actress, conveying so much mystery and depth without seeming to do much onscreen

exactly. she proves that fleshing out a character can be effortless and doesn't have to be flashy.

This list, different from previous ones, makes justice to Asian action actresses. The reason that makes the other lists not so good is that in the decades before 2000's, is that there were very few actresses in action movies. Right know I would need to Buy Viagra dosage to watch all of the current ones he he.

I find Maggie Cheung the prettiest of them all. Though I like Zhao Wei's action scenes better. It is really fun to watch women action movies from time to time.

I am always searching online for articles that can help me. Looking forward to another great blog. Good luck to the author! all the best!
RES

Unknown said...
This comment has been removed by the author.
3:26 AM

I saw her in many movie. I like very much her acting. Thanks for sharing nice information. Professional Website Design Company Bangalore

I found your post such a informative and useful post,thanks for sharing the post.Stoves York

The post is very informative. It is a pleasure reading it... Wooden outdoor playground equipment

The post is very informative. It is a pleasure reading it.
Joomla Web Design

Unknown said...
This comment has been removed by the author.
12:05 AM