1. Audrey Hepburn as Holly Golightly in Breakfast at Tiffany's (1961) 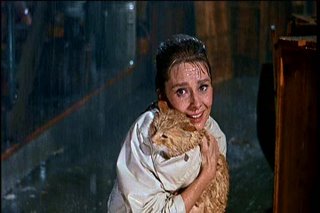 Audrey Hepburn, one of the most beloved actresses of all time, has had many films in which she plays mostly sweet girls, or naughty, tough women with soft hearts. The power of Hepburn is that she makes any role she plays endearing. If asked to pick a favorite Hepburn performance, many may go for her Princess Ann in Roman Holiday, while some may choose Sabrina, or others still Eliza Doolittle in My Fair Lady, or some other role. Many, though not necessarily most, would pick perhaps her most amusingly and memorably named character: Holly Golightly in Breakfast at Tiffany's. Who would forget the opening scene of the film, where she eats in front of Tiffany's with a her famous black dress on; or her singing "Moon River;" or her love for "Cat;" or just simply her child-like innocence and radiance? In my humble opinion, Audrey Hepburn has never been as beautiful, or as skilled, as she is in this film. She masterfully portrays Holly as a strong, no-nonsense girl who nevertheless is longing for love in the truest sense. One cannot help but be drawn into Holly's world and want to reach out and comfort her, for despite her confidence, she is fragile and vulnerable. Whatever scene she's in, she shines in it. In the rain, looking for Cat and finding both it and love, she becomes more complete and we love her even more for it.

This may not be the best performance of any actor in terms of sheer skill, but how can we compare on that basis anyway? Definitely, Audrey Hepburn's Holly Golightly is one performance that will forever stand the test of time and define her as an actress.