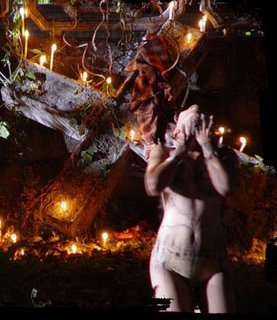 Ringu's Sadako will forever remain one of cinema's scariest concoctions, but the proliferation of obvious clones since 1998 has become quite tiresome. While some of local cinema's more recent blockbuster horror flicks (notable among them the two Kris Aquino starrers, Feng Shui and Sukob) have injected aspects of Philippine culture into their plots, the final package has not strayed far from the formulaic horror introduced by Hideo Nakata. It is therefore very welcome news when a Filipino horror film veers away from this trend and touches on something truly horrific in the local framework: the aswangs of Filipino folklore. And to have a Filipino based in Canada do it first!

Ang Pamana: The Inheritance is Romeo Candido's third and biggest film to date, though it still forsakes a big stellar cast for depth and sense. When the three grandchildren of a woman in touch with spirits inherit her home in the province, they become exposed to the threats of elementals and evil creatures, among them the kapre (a tobacco-smoking giant living in trees) and the sinister manananggal (a fetus-eating aswang who detaches her torso from her lower half and flies in the night in search of pregnant women). The grandmother, having been strongly attuned to the spirit world even in life, expectedly lingers in the house and its environs.

The cinematography and editing are sleek and professional, making this one of the better shot modern Filipino horror films. Some stylistic touches, such as the dominant use of lizards, work magically. The original songs (composed and performed by the director) are appropriately mesmerizing, with pop sensibilities yet bizarre enough to make them ideal for the dark theme. Much has been said about how natural and organic the performances of the actors here are, but it has to be said again, for it is one of the primary strengths of the film. From the cameos (touching turns by veterans Tirso Cruz III and, unfortunately less fleshed out in terms of character development, Jacklyn Jose) to the major players (Darrel Gamotin and Nadine Villasin), there is no false or cringe-worthy note in the ensemble. Gamotin, whose Johnny is undoubtedly the lead, effortlessly controls the character's confusion, resolve, terror. His is not a great performance as far as great performances go, but it is refreshingly natural and void of overacting (actually, the same can be said about everyone else in the film). Local model and TV host Phoemela Baranda is utterly beautiful here and shows that she can act better than most insanely famous young stars of Philippine cinema (a key scene, strong and well executed, is when her sweet facade breaks down with a vicious slap on a hapless cousin's face). She should further develop her acting skills with more dramatic roles in the future. But the standout by far is Nicco Lorenzo Garcia, the mentally handicapped cousin of whispered origins. Beyond being very convincing as a disabled person, his lines (and tears, in certain crucial scenes) are delivered with commendable timing.

There are, however, weaknesses in character (aside from Jose's character, Villasin's Ana is an accessory, with her child's fate even being disturbingly left unexplained after the manananggal's attack) and plot development (isn't the sudden turn to a "monster hunt," even quest-like in that it is precipitated by a bit of guidance from the resident kapre, a bit rushed?). And while the depiction of the manananggal, perhaps one of Filipino folklore's most chilling denizens, is interesting, it certainly wasn't scary enough (this viewer was expecting to get ready to have nightmares about the thing). It is unfortunate that such a foul creature was not made terrifyingly memorable enough to stand the test of time as a true cinematic monster, the way Sadako surely will.

Despite these flaws, this viewer is inclined to proclaim Ang Pamana: The Inheritance one of the better and more original horror films to have come out of Asian cinema in many years. Grade: B+