35. Willem Dafoe as Jesus Christ in The Last Temptation of Christ (1988)

Willem Dafoe's eyes and lips make him look naturally scary, lending strength to his darker roles, such as Norman Osborne/Green Goblin (Spider-Man) and Max Schreck (Shadow of the Vampire). More than a decade before either film, Dafoe used his unique looks to assume the persona of the man Himself, Jesus Christ. The film itself is controversially unusual, and casting Dafoe in the role of an all-too-human Jesus would not have worked had Martin Scorsese's overlooked artwork The Last Temptation of Christ presented the same Jesus that everyone had gotten used to. But here Jesus is callous, fragile, and temperamental. The typical blue-eyed Jesuses of the Lenten TV specials would have been out-of-place in such a re-telling. Dafoe easily owned the role.

One of the best and most memorable comedies also produced what I believe is comic genius Bill Murray's best performance (yes, I have seen Lost in Translation, but not Rushmore). His Phil Connors in Groundhog Day is as nasty and acerbic as Murray could get, but it is also one of the more deserving of sympathy. What would you do if you were fated to spend the rest of your life in one day? All at the same time Murray, in his greatness, manages to make the whole experience seem maddening, exciting, promising, bittersweet, and ultimately, hopeful.

Robin Williams's second appearance on this list (he's also #37) is for one of the funniest, most memorable, and most imitated performances in recent cinema: the title role in Mrs. Doubtfire. Williams is brilliant as the burly English nanny, and it is when under those pounds of prosthetics and makeup that he achieves the most, but even as Daniel Hillard, he is nothing short of a great actor. When he pleads for the right to keep seeing his children, your heart reaches out to him, so much so that the shock over what lengths he's willing to go is far outweighed by the justification (and the sheer enjoyability of it).

Of course, before Robin Williams donned the suit and the mask to become a woman, the incomparable Dustin Hoffman already did it in Tootsie, and to equally hilarious and unforgettable results. How great was Hoffman? He doesn't look particularly feminine, and not as much makeup was used on him as on Williams, but he makes us believe that Dorothy Michaels is a real woman. You can very seldom go wrong with Hoffman, who gives such a quirky gravitas to any role that you can't feel that he has ever fallen short of giving his characters life. 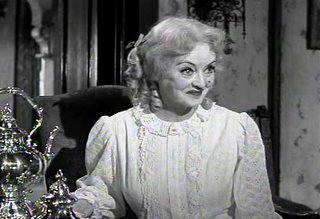 "Sister, sister, oh so fair, why is there blood all over your hair?" In the creepy, claustrophobic Davis-Crawford dream team-up What Ever Happened to Baby Jane?, the luminous screen legend Bette Davis is the nastiest and most bitter that she's ever been. She's a good enough actress that she can pull off practically any role, but she is arguably at her best when downright scary. Baby Jane Hudson's egomaniacal desperation makes Swanson's Norma Desmond (#38) seem a lesson in contentment. Garbed in clothes reminiscent of her faded child-star days and singing "I've Written a Letter to Daddy," serving her sister Blanche (Joan Crawford) a rat in a tray for food... Few roles are as deliciously grotesque as Baby Jane, and absolutely no one could have done it better than Bette Davis.