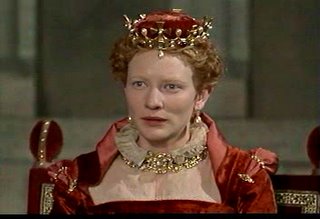 I love Shakespeare In Love more than I probably should (it's my second favorite movie of all time, just after the Lord of the Rings trilogy), but it remains one of the biggest blunders and injustices of the Academy to have given Gwyneth Paltrow the Best Actress statuette over who was the true best actress of that year. Actresses with the name of C/Kate seem to be blessed with uncannily magnificent acting talents (Kate Hepburn and Kate Winslet, anyone?); Australian Cate Blanchett is undoubtedly one of the most respected thespians of her generation, despite having gotten only two Oscar nominations (and one of what should have been two wins). Everyone buzzed her performance as Queen Elizabeth I in Elizabeth for its sincerity and power, but she lost out to then "It" girl Paltrow. The term "breakthrough performance" could not be better applied to any other (though of course Blanchett has been acting professionally before that film). Just like Helen Mirren is being praised this year for bringing out the humanity of the current monarch in The Queen, Blanchett is able to strike a balance between showing the queen who brooked no nonsense and survived the schemes of her enemies and portraying her as ultimately a woman, who could love and get her heart pierced. At times fragile and tentative, at times headstrong and willful, Blanchett went through this prism of emotional states like a true artist best at her craft: with control, precision, and sophistication. Many continue to have issues against Shakespeare In Love winning the top prize that year over Saving Private Ryan. That result could be justified by many reasons beyond the Weinsteins' power. The true injustice that year, with all due respect to Mrs. Paltrow-Martin, was the Academy passing over Cate Blanchett's bravura performance as the queen that she truly is.