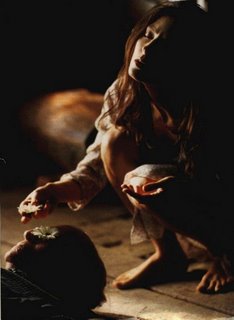 "Chicka, chicka, chickabee." It may sound like gibberish, but for Nell Kellty, a wildchild with her own language, it speaks volumes. There was a time when the Academy loved the brilliant Jodie Foster, bestowing on her three nominations (two of them wins) in six years. Her last nomination was for playing the title character in Nell, a film that perhaps not many will remember seeing if not for Foster's incendiary performance. Despite the interesting premise, the film is ultimately unremarkable and not very memorable. But Foster lifts it several notches to the level of a film that must be watched for the artistry of its major star. In the hands of a less capable actress, the role would have turned overly demanding of pity and attention. Foster's performance subtly, gently makes us understand Nell's humanity, whether or not she speaks words and in whatever language.