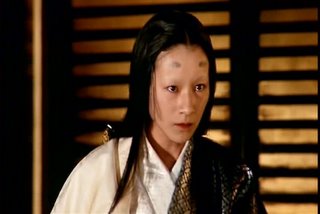 In one of world cinema's best films, the great Akira Kurosawa's Ran, the performances are majestic and forceful, as if they were actors playing in front of gods (Peter's jester Kyoami cries in anguish to them in one key scene). The actors constitute only one part of the glorious scale of this movie, but they are as memorable as the battle scenes and the haunting music and the splashes of red. Her role is neither large nor central to the story (a point that can perhaps be argued), but Mieko Harada's masterful portrayal of the Lady Kaede demands attention--and fear. Her Kaede is a scheming, slinking serpent of a woman. She knows what she wants and she's going to get it, if she has to glare at you with demonic eyes or threaten you with a dagger to do so. Not many actresses could bring such intense fire, sophistication, and a hint of eeriness to the role of a manipulative, ambitious wife. Toshiro Mifune will forever remain the principal actor in Kurosawa's troupe of thespians, but Harada can stake a claim to having one of the most vivid and indelible contributions to the director's craft.