I believe that it is still one of the Academy's greatest mistakes that they did not give Paul Giamatti a nomination for his role in the critical darling Sideways. In a sea of actors playing real-life people that year, Giamatti's Miles was one of the most realized and brilliantly acted, quiet and understated.

That same year, Annette Bening turned in one of the best and juiciest performances of her career, only to lose (again) to Hilary Swank. What does it take to have Bening win an Oscar? Outrageously over-the-top, sexy, defiant, regal...all these words apply to Bening's Julia Lambert, stage diva, in Being Julia. No one but her could have been Julia.

13. Leonardo DiCaprio as Howard Hughes in The Aviator (2004)

It would seem odd that three of the performances in my list are from the same year (and so highly ranked). Blame it on freshness of impression and, of course, sheer talent. While Giamatti's turn in Sideways was the meek, passive performance, Leonardo DiCaprio's Howard Hughes was the firecracker, the powerhouse: bold and brazen. The role of the eccentric director in The Aviator allowed DiCaprio to explore and amazingly display a wide range of emotions in a rollercoaster head trip. Having gotten a Supporting nod once for his role in What's Eating Gilbert Grape, DiCaprio seems to excel in portraying mentally challenged characters. But his range and depth of acting cannot be denied, easily proving that he's so much more than a pretty face.

In House of Sand and Fog, Ben Kingsley plays the role of an Iranian immigrant who could quickly be labeled by many as a villain. With his stern, no-nonsense attitude, he prevents Kathy (Jennifer Connelly) from getting back her house after her eviction. It is easy to have no sympathy for and instead have ire toward Behrani, for he is consistently cold, but in the last half or so of the film, it is inevitable to feel the struggles of the man. Kingsley portrays Behrani with a power and a humanity that is not often seen in many performances of recent cinema. It is easily his best performance, and definitely for me was the best of 2003. 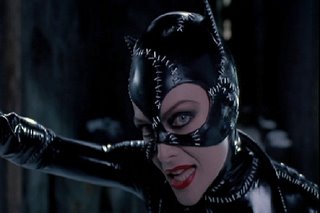 Many of the same words that I had used to describe Annette Bening's Julia Lambert can also be used for Michelle Pfeiffer's Catwoman in Batman Returns: over-the-top, sexy, defiant. Add to those slinky and campy (in a good way). Diva in leather. This is arguably Pfeiffer's most memorable performance; the images of her as loopy, confused Selina and especially in leather with a whip as rebellious Catwoman have been ingrained in the minds of viewers. In the media of television and film, Pfeiffer's is the essential Catwoman, strong yet conflicted and fragile. And no one could have looked better in that costume.