9. Marlon Brando as Don Vito Corleone in The Godfather (1972) 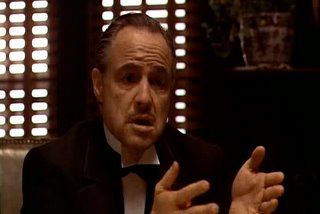 "I'm gonna make him an offer he can't refuse." As Tom Hanks's character in You've Got Mail claims, you can expect a man to be able to quote from one of the most revered films in cinematic history (particularly by men), Francis Ford Coppola's The Godfather. The film is chockfull of interesting, even incendiary sequences, conversations, and characters. But of the latter facet of the epic, none is more forceful and imprinting as Don Vito Corleone, played to subtle, raspy-voiced perfection by the late great Marlon Brando. It speaks highly of Brando's skill that despite (or precisely because of) Corleone's placid manner, he is able to dominate the mental and oral landscape of anyone who sees the film. He is easily the most impersonated of the characters. Corleone had to have the balance of power and tranquility, a quiet authority that can be respected tremendously. In the hands of a less introspective actor, that balance would not have been achieved. But Brando nails the performance with the gravitas of a silent, thunder-less storm. In a rich history of characters played over his years in cinema, Corleone may not be his best acting showcase as far as skills go, but it is essential Brando and definitely the most realized and unforgettable.